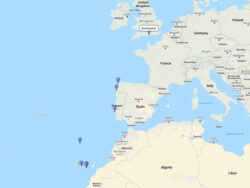 Join Royal Caribbean on this roundtrip Canary Islands cruise from Southampton on board Anthem of the Seas. Discover best of Vigo, Lisbon, Lanzarote, Gran Canaria, Tenerife, Madeira and La Coruna. Anthem of the Seas leaving Southampton, UK for 12 days from September 23, 2022.