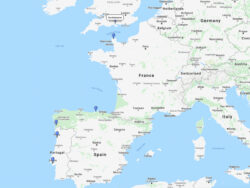 Discover the best of Spain, Portugal and France with P&O Ventura

There are plenty of daily activities on board P&O’s Ventura to keep you busy. P&O’s Ventura has everything a discerning cruiser could want, bars, sports venues and shops.

Santander tourist information. The port city of Santander is the capital city of the Cantabria region and one of the most elegant and beautiful cities on the Spain’s north coast. The Palacio de la Magdalena, once the royal summer residence,[...]

Experience the relaxed ambience onboard P&O’s Ventura attentive service from a friendly staff that knows what hospitality means, you’ll find your P&O’s Ventura ship truly is your home away from home.

Whether you like to indulge in food, sport, games or education, there are tons of cruise activities aboard every P&O cruise ship.

Join P&O Cruises on this roundtrip Spain, Portugal and France cruise from the Port of Southampton to Santander, Vigo, Lisbon, Porto and Cherbourg on board P&O’s Ventura. Ventura leaving Southampton, UK for 10 nights from September 9, 2023.